Love is the Punch Line is a well-written, suspenseful novel. You’ll meet Josh Steinberg a self-loathing comedian with severe depression, problems maintaining his career and a nonexistent love life. Then he meets Holly Brannigan at one of his shows, and when her phone rang during his set, he calls her out and demands she leaves the club. She did; right after throwing a glass of water in his face.

The author, Kathleen Jones, did an excellent job with the dialog, diving in deep to show the honest feelings of the characters. Waves of tension pulsate throughout the novel, leaving you wondering if both the major characters could release their baggage from the past and start over again.

This is an excellent read with an underlying powerful message — Never Give Up!

Reviewed in Canada on Amazon.ca by Ruby Densmore on June 18, 2020

Excellent read. I couldn’t put it down.

Nice love story between two people who didn’t believe they were worthy of love.

I was lucky enough to become aware of Love Is The Punch Line. I found it to be funny with romance in all the right places. I appreciated the perspective of comedy in romance and not in a formulaic rom-com way. As a reader, I enjoyed the deft way the author handles comedic and romantic elements of the story to an enjoyable conclusion. 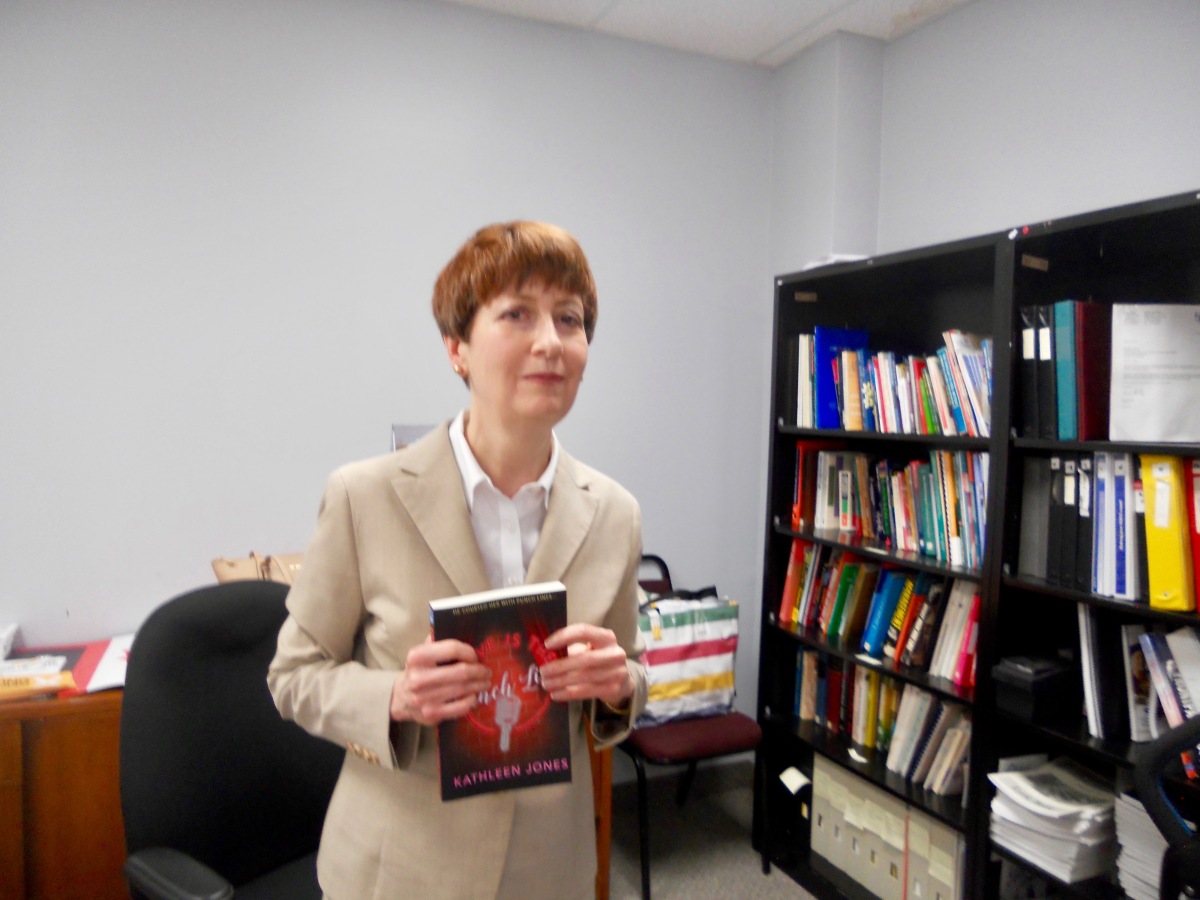 Jones pens a unique and raw story in Love Is the Punch Line. I haven’t read anything from this author before, and I really enjoyed this story. The characters were raw and very real. Reader, enter the world of comedy clubs and an adventure in romance. The author’s writing style is smart and while balancing romance with the raw lifestyle of comedy and fame (or fall of fame). The author brings Josh and Holly’s story to life. There is a great chemistry between the characters, and a depth that makes them realistic and flawed. Josh and Holly’s connection is not forced. A very well-written story, and I enjoyed it. The author’s technique of intense and believable characters and great plotlines is a gift. I look forward to reading more by this author. This book is a definite recommendation by Amy’s Bookshelf Reviews.

I received this book free in exchange for an honest and unbiased review. ~Amy’s Bookshelf Reviews

By Kathleen Jones, The Quirky Novelist. Please sign up for free updates at ‪http://eepurl.com/ceSobT

First-time authors who are looking for book reviews, beware! There are a number of dicey schemes out there that will waste your precious time and money. I pursued several of them after I published my first novel, a quirky midlife romance (Love Is the Punch Line) in 2018. Here’s a couple that weren’t worth the effort:

This is a truly heartwarming, romantic, and engaging read. And it’s also a pretty good look at the life (and Love-life) of those in the comedy world. Jones manages to understand the industry, and the people involved in it, without resorting to old cliches about comedians or their relationships. Mostly, it’s a very enjoyable read, with fun and engaging characters. There’s a lot of heart and a lot of fun to be had here. Give it a read; you’ll enjoy it.

It is unusual for me to read a book in two days but I just wanted to find out what finally happened after all the ups and downs in Holly and Josh’s relationship. I couldn’t see what Holly saw in Josh but wanted their relationship to succeed anyway. Lots of laughs but moments of pity and sadness for the characters too. This book would make a great screenplay, Kathleen. Very original storytelling!

A romance that keeps it real

Review posted on Amazon.uk on 16 September 2018 by Jack Dawkins, Esq,

Love is the Punch Line, Kathleen Jones’ debut novel, is not your average romance.

Straying from the tried and tested formula of two young, beautiful, perfect people overcoming a series of challenges and rivals on the path to true love, Kathleen gives us a relationship that feels a lot closer to the real world. The story revolves around Josh, an aging comedian on a steep downward career curve, peddling weak material at obscure comedy clubs – a world away from his past as a successful sitcom star. Josh is self-obsessed, depressed, and consumed with doubt over both his comedy and his unattractive appearance. When he meets Holly, a Canadian business woman, there are early hints that she could be his salvation – but both of them are damaged from previous failed relationships and prone to overreact to every little setback that comes their way. At times it’s hard to like either character, but that adds to the sense that this book reflects real life, where few people can remain consistently likeable in their most difficult moments.

A string of mishaps and misunderstandings conspires to keep the couple apart as the novel progresses, and we are kept guessing as to their eventual fate until the finals chapters. The book is an enjoyable ride, but touches on serious themes such as depression, suicide, and body image. Recommended if you want a romance that goes beyond the norm.

A different kind of romance

“Love is the Punch Line” is a well-crafted story, at times charming and at time exasperating (in a good way) novel about romance between two mismatched people, Josh and Holly. Both see themselves through self-critical eyes and fear they are over the hill and undesirable. It’s a refreshing change from romances between young and perfect people, and I enjoyed reading it, though I often found myself wanting to shake Josh, the lead male character (who seems to be based upon a Rodney Dangerfield type of stand-up comic). Just when I want to wash my hands of Josh, he becomes so vulnerable and soft-hearted that I understand why someone–like Holly, the leading lady–could actually love him.

There’s a heartwarming segment where one of his fellow stand-up comics dies, and Josh struggles with his grief and confronts his own failings. It’s revealing of Josh’s character, and adds a poignant twist to the story, though it is not a main plot line.

Josh often does his best to ruin their relationship with his comedic digs at Holly, even after he realizes she is a sensitive person and easily wounded. His troubled history with women seems to drive him to test–or destroy–the relationship. Unlike the typical genre romance male lead, he is often his own worst enemy and his insecurities often seem insurmountable.

Unlike the traditional romance, it’s never really clear if this couple will have their “happy ever after.” And that adds to the appeal of this love story because it is not formulaic and there is a “what will happen next” tension that carries through the story. The author does a great job of taking on the romance genre and creating something fresh and intriguing out of it. In other words, romance genre readers will still like it, but non-romance genre readers will also find much to enjoy in the book. Which is to say, in many ways, it transcends genre boundaries.

Oh, and yes–the screen play Josh writes is a nicely played as a strong thread in the story. Will it ever be made into a movie? Will it refresh his lagging career? Is Holly’s belief in the screen play enough to carry them through the challenges? Read it and see!

Complex, original within the romance genre, and entertaining.

Kathleen Jones sets up an original situation when a has-been comedian and a very attractive woman in his audience fall for each other. Much of their courting takes place during his performances when he makes one liners about her on-stage and she answers back from her table. Jones excels at descriptions of settings, whether they are the seedy clubs Josh performs in or the stunning natural beauty of Canada. Read Jones’ clever tale to discover if romance can blossom under these unusual circumstances.

A lover of words who writes from the heart. Welcome to my site! I’m a refugee from the corporate world, a lover of books, dogs, and 1940’s/1950’s vintage clothing (not necessarily in that order!), a wife and a mom . . . and, oh yeah, a novelist! My page is a forum to share helpful ideas with other fledgling novelists. It's also a bit of a dumping ground for posts on my personal interests (like vintage clothing) that have nothing to do with writing! Finally, this is a place for YOUR ideas. Feel free to post your ideas and comments. My first novel, a lighthearted romance set in the world of stand-up comedy, was published by Moonshine Cove in April 2018.
Join 17,078 other followers
Kathleen Jones, The Quirky Novelist
Blog at WordPress.com.
Loading Comments...
%d bloggers like this: