Once again I’m finding whole new books and authors here on Linda’s Book Bag. This time it’s Kathleen Jones who joins me to stay in and tell me about one of her books.

Staying in with Kathleen Jones

Welcome to Linda’s Book Bag Kathleen. Thank you for staying in with me.

Tell me, which of your books have you brought along to share this evening and why have you chosen it? 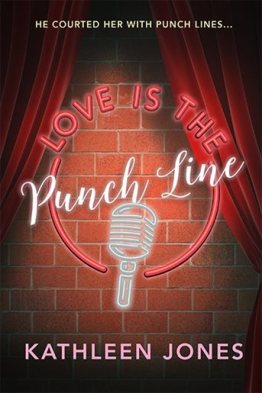 I’ve brought along my new novel, Love Is the Punch Line, which was published by Moonshine Cove in April. It’s a quirky, lighthearted romance set in the world of stand-up comedy. I brought it along to show “women of a certain age” that romance should not stop after age 40.

(Too right! As someone fast approaching 60 I can quite agree with that premise for a book!)

What can we expect from an evening in with  Love Is the Punch Line?

You can expect an evening of hilarious comedy from a real legend, Josh Steinberg, the “Jewish Comedy King.” Even though he’s over 50, plump, balding, and washed up, Josh is still revered by die-hard comedy fans, who appreciate his edgy sense of humour.

You’ll also meet Josh’s woman, Holly Brannigan, a slim, attractive, and bright 50-year-old businesswoman. Unlike the other women in Josh’s past who haven’t treated him well, the smart and sensitive Holly is crazy about Josh and even finds his unconventional looks wildly sexy. No wonder Josh calls her “Holly the Brain.”

(I’m smiling already. I love the sound of Josh and Holly.)

By meeting Josh, I hope that people will learn that no matter what a person looks like on the outside, he or she deserves a chance to spend their life with someone who truly loves and cares about them. And I hope that men who meet Holly will learn to value a woman’s brains, as well as her looks. After all, the brain is the biggest sex organ!

Finally, I hope that older people who haven’t found that special person will give romance another chance. You just never know!

(What a wonderful sentiment, Kathleen.)

What else have you brought along and why?

I brought along the script that Josh wrote for his comeback movie, It Only Hurts When I Laugh. Holly talked him into writing it, telling him that he had the talent to write a script about real life and real people; in the past, Josh had written mediocre movie scripts that were only collections of silly gags. Buoyed by her belief in him, Josh ended up writing a romantic script about two characters who resembled himself and Holly!

Thanks so much for staying in with me to tell me all about Love is the Punchline Kathleen. I’ve enjoyed hearing about Josh and Holly.

Love is the Punch Line

He courted her with punchlines.

Middle-aged stand-up comedian Josh Steinberg, formerly the star of his own popular TV series, finds himself struggling to keep his career alive, playing seedier and seedier clubs. Plump, balding, and plain-looking, he has never had much luck with women. That is, until Josh meets Holly Brannigan while performing his stand-up act in a comedy club. Holly, an attractive, intelligent, and divorced 50-year-old businesswoman, becomes instantly smitten with Josh and even finds his unconventional looks wildly sexy.

Love is the Punch Line is available for purchase from Amazon and Indigo Books.

Kathleen Jones is a former book editor and technical writer. She graduated from the University of Toronto with a degree in English literature and completed Ryerson University’s Certificate in Publishing program. Kathleen writes for a number of popular book blogs, including Romance Junkies and the blogs of Jane Friedman and British novelist Tony Riches. She also contributes monthly book reviews to Goodreads. Kathleen lives in Toronto, Ontario, Canada.

A lover of words who writes from the heart. Welcome to my site! I’m a refugee from the corporate world, a lover of books, dogs, and 1940’s/1950’s vintage clothing (not necessarily in that order!), a wife and a mom . . . and, oh yeah, a novelist! My first novel, a lighthearted romance set in the world of stand-up comedy, will be published by Moonshine Cove in April 2018. View all posts by kath1960

A lover of words who writes from the heart. Welcome to my site! I’m a refugee from the corporate world, a lover of books, dogs, and 1940’s/1950’s vintage clothing (not necessarily in that order!), a wife and a mom . . . and, oh yeah, a novelist! My page is a forum to share helpful ideas with other fledgling novelists. It's also a bit of a dumping ground for posts on my personal interests (like vintage clothing) that have nothing to do with writing! Finally, this is a place for YOUR ideas. Feel free to post your ideas and comments. My first novel, a lighthearted romance set in the world of stand-up comedy, was published by Moonshine Cove in April 2018.
Join 19,039 other subscribers
Loading Comments...
%d bloggers like this: